Rest out of the city

Rest out of the city

For the good rest you have no need to travel far-far away. The unforgettable impressions are just out of city boundaries. Kharkov region has abundance of beautiful places: parks, unique churches and museums, nobleman's estates, forests, pools, and other things.

Stariy Saltov
In this direction is located the biggest reservoir of the eastern region – Pechenezhskoe vodohranilishe (Pechenezhskiy reservoir). Along the beach there are many rest homes and sanatoriums.
How you can reach Stariy Saltov:
By car: go along highway M-03, in Chuguev turn left to Kochetok.
By bus: minibus 602 from Konniy rynok.

Just next to La Notte. A sort of beach you do not want to go. We put it here as a warning, not as an advice. Do not swim in the river under any circumstances. We've been there once and will never go back again. Too dirty and not safe for health: 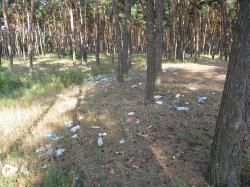 Sumy direction
In this direction you will find numerous cultural and natural attractions.

Skovorodinovka village
Skovorodinovka is famous for the museum of Gregoriy Skovoroda - famous philosopher and poet of XVIII century who lived and worked here.
By car: go along highway to Sumy; in Ol’shany village turn right (to the north) and in 20 km you will reach Skovorodinovka.
By bus: from Holodnaya Gora metro station bus №169

Berezovskoe village
By car: 25 km along highway to Sumy at sign «санаторий Берминводы» (sanatoriy Berminvody) turn to the right.
By bus: from Holodnaya Gora metro station bus №159 “Kharkov-Berminvody”.
By train: from Yuzhny Vokzal take any train to “Kurortnaya” station in the direction of Zolochev.

By car: Go along highway to Kiev to the sign “Старый Мерчик “ (Stariy Merchik) and then go along highway to Sumy to the city Okhtyrka. From Okhtyrka by the road to Poltava till the village “Гай Мошенко” (Gay Moshenko) and then to turn left.
By bus: you can take a bus to Buymerovka from Tsentralny Rynok metro station.
By train: from Yuzhny Vokzal train №281 “Kharkiv-Sumy”.

Overestimated place. Expensive but absolutely not worth even half the price. Service is terrible. If you really need some nature, better go to Vorskla river in Okhtyrka.

Izum
By car: 100 km. Go along highway to Chuguev, from Chuguev 80 km to the south-eastern direction.
By bus: you can take regular buses from Gagarina autostation;
By train: there are regular trains to Izum from Yuzhniy Vokzal and Levada trainstation (at Prospect Gagarina metrto station).

Pechenegy
At Pechenegi is located wonderful Pechenezhskoe vodohranilishe (Pechenezhskoe reservoir). Many sanatoriums and rest homes found their place along its picturesque banks.
By car: 37 km. Go to the town Chuguev and there turn at north-west in the direction of Kochetok.
By bus: there are regular buses from bus station N6 at Proletarskaya metro station.
By train: there are regular trains from Levada train station. Go to Chuguev and from there take bus to Pechenegi (28 km).

Pechenegy Fest takes place here every year. This even is really worth attention: open air ethnic festival hosts hundreds of people. It will be on the 11th of September this year (2010). You can get there by bus from Proletarskaya metro station.

Krasniy Oskol
At the settlement Krasniy Oskol is located the biggest reservoir “Krasniy Oskol” of Kharkov region. Here you will also like fortress “Tsariov-Borisov” which was founded in 1599 by order of Boris Godunov.
By car: 130 km. The settlement is located in 10 km from Izum. To find it you need to go from Kharkov to the east in direction of Chuguev, from it to Izum.
By bus: there are regular buses from Gagarina bus station.
By train: there are regular trains from Yuzhniy Vokzal and Levada train stations. Go to Izum and from there take bus to Krasniy Oskol.

White Beach
The comfortable and clean zone for recreation with your family!