I mean, yes, it is about time Kharkov gets its new airport. The one we have now looks like an emergency run-way in the jungle, and its limits are just about 200,000 visitors per year.

-- See the people gesticulating, waving their arms down there? This is where you need to land!" --- 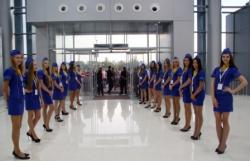 If you happen to be coming from another country, the border control is traumatizing. The infrastructure, the uniforms and even the smell is from the soviet era. The whole setup makes it very intimidating to go through the immigration and customs.

The new terminal was inaugurated in August 2010 by president Yanukovich, and was opened to public in January 2011.

Pegasus (To Kharkov through Istanbul) www.flypgs.com

From Kiev (Borispol) to Kharkov www.aerosvit.com